The Straits of Tiran are often sought after by advanced divers in Sharm el-Sheikh. This is due to the fact that the area features strong currents and deeper sites than found elsewhere around the Sinai Peninsula. That doesn’t mean there isn’t also plenty for beginners to explore. Everyone is bound to enjoy the crystal clear visibility and colorful underwater world found in the Straits of Tiran.There are four coral reefs in a line across the Strait, namely Jackson Reef, Woodhouse Reef, Thomas Reef and Gordon Reef. These were named after the British cartographers who created the first nautical map of the region. Today, divers can enjoy coral reef plateaus teeming with fish and steep wall drop-offs which offer exciting pelagic encounters. In particular hammerhead sharks and the occasional tiger shark arrive on the strong currents that make diving in the Strait a perpetual adventure. A series of wrecks stand on the edges of the reefs as a warning to passing ships. A few of these are within recreational limits and offer a bit of variety to divers in the area.The Straits of Tiran can only be reached by an hour and a half boat ride from Sharm el-Sheikh. Diving season is year-round. This part of Egypt experiences warm winters and very hot summers, however water temperatures can vary significantly in the Red Sea. Expect the warmest water temperatures to occur in August with an average of 82°F (28°C). The coolest water temperatures are recorded in February (72°F/22°C) when a 5mm wetsuit may be necessary to dive comfortably. Visibility remains a fairly constant 65 feet (20 meters). Between the four pristine reefs, fantastic pelagic action and interesting wrecks, you will be spoilt for choice in the Straits of Tiran.

The reefs in the Straits of Tiran host some of the best marine life in the region. Orange and purple anthias crowd the water and an abundance of reef fish, including some of the area’s endemics, are a treat for the eyes. Tuna, reef sharks and barracuda patrol the reefs. Jackfish and batfish can be spotted in the blue while grouper and puffer fish shimmer around the reef. On the larger side of things, divers can expect to see turtles, humphead wrasse and a variety of moray eels. Lucky divers might spot hammerhead sharks or an occasional tiger shark on Jackson Reef between July and September. Although rare, whale sharks can sometimes be seen feeding near the reefs. 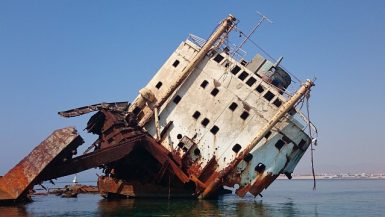 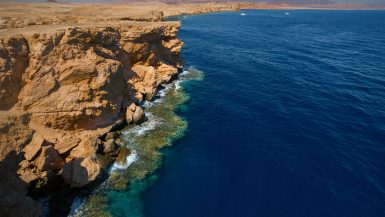