Papua New Guinea (PNG) is a land of breathtaking landscapes and amazing creatures both above and below the water’s surface. It’s an adventurer’s playground with thick tropical jungles, high mountain ranges and spectacular scuba diving. Located in the Asia Pacific region’s Coral Triangle, surrounding by the Bismarck, Coral and Solomon Seas, PNG has a stunning array of marine species just waiting to be discovered. With barrier reefs, coral walls, fringing reefs and sea grass beds along with spectacular World War II wrecks, scuba diving in PNG reveals treats around every corner. Dive from a shore-based operation or a liveaboard to explore just some of the 52,000 square kilometres/20,000 square miles of reef systems.

The coral reefs of Papua New Guinea lie within the Coral Triangle, an area with the highest marine biodiversity on earth. During muck dives and macro dives, you are likely to see pygmy seahorses, mimic octopus, flamboyant cuttlefish, and varieties of frogfish, scorpionfish and pipefish. Not forgetting more types of nudibranch than you might be able to remember as well as multiple species of shrimp and crab. There are larger reef dwellers to look out for as well including nurse sharks, groupers, wobbegongs and leopard sharks.Divers looking for pelagic marine life will be delighted with Papua New Guinea. Hammerhead sharks, manta rays, and whale sharks are frequently seen in Papua New Guinea along with passing pods of whales and dolphins. At the outer seamounts and drop-offs, schooling pelagic fish like barracuda, tuna, mackerel, and trevally are often seen hunting for prey like snapper and fusilier together with sharks.

Fly to Jacksons International Airport in Port Moresby directly from Singapore, Australia, Hong Kong, Bali, or Japan. Land transport infrastructure is poor so you will have to take connecting flights on local carriers like Air Niugini to other destinations in Papua New Guinea. 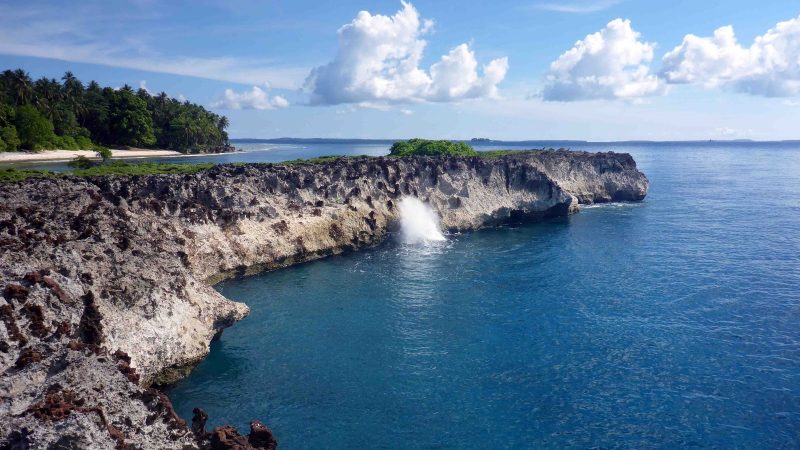 Divers can choose land-based diving from Kavieng town or Lissenung Island, or opt to explore the area via liveaboard diving vessel. Water temperature is warm throughout the year at 82-86˚F (28-30˚C) and with so many different dive sites to choose from, even new divers will be comfortable here.There are several areas for diving at Kavieng. To the southwest, the...

Milne Bay is vast with a great variety of dive sites. The area boasts superb muck diving, airplane wrecks from World War II, stunning drop-offs, towering pinnacles and colorful coral gardens. For land-based diving, pick from resorts and dive operators located in Alotau or others along the north coast of the bay. Otherwise, there are liveaboard diving vessels which...